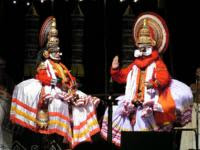 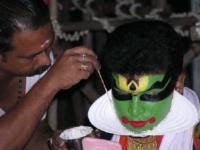 The Kathakali is an ancient theatre art form of the State of Kerala in southern India.  The people of Kerala are known as the Malayalee.  There are 25,000 Malayalees in Singapore, forming one of the largest sub-groups of the Indian community in Singapore.

Traditional Kathakali performances tend to involve tales from the two great Indian epics, the Ramayana and the Mahabharata.  Kathakali is most renowned for its elaborate make-up and flamboyant costumes.  In fact, the make-up process can often take hours.  The one I witnessed took four hours to complete.  According to this Kathakali website: "The faces of noble male characters, such as virtuous kings, the divine hero Rama, etc., are predominantly green. Characters of high birth who have an evil streak, such as the demon king Ravana, are allotted a similar green make-up, slashed with red marks on the cheeks. Extremely angry or excessively evil characters wear predominantly red make-up and a flowing red beard. Forest dwellers such as hunters are represented with a predominantly black make-up base. Women and ascetics have lustrous, yellowish faces."

The Kathakali performance itself is often very long and often takes place through the night, till an auspicious hour at dawn.  The one I attended last 7 hours, till 6am the next morning.  The Kathakali is also a highly ritualistic affair.  Every performance begins with rituals devoted to the gods, with the dancers dancing behind an embroidered curtain held by two assistants.  That is a private performance exclusive for the gods, to secure their blessings for the performers and the audience.  It is only after this ritual, which in my case lasted 50 minutes, that the actual performance began.  Also noted in any Kathakali performance are the enormous headdresses and amazing, highly developed use of facial expression and gesture to convey messages and meaning.