-------------
Observations of TWC
-------------
"Enormous damage has been done and a lot of that damage is done to Singapore and self-inflicted. This could have been an opportunity for them to showcase to the world their development process."
"I would argue whether it has to be as authoritarian as it has been and I would certainly argue that at the stage of success they have reached, they would do much better for themselves with a more visionary approach to the process."
World Bank President Paul Wolfowitz,
refering to Singapore Government's ban on certain CSO representatives entering Singapore to attend the World Bank/IMF conferences.
-------------
I received news that Singapore Democratic Party Chairman Chee Soon Juan and his supporters have been protesting against the Singapore Government at Speakers’ Corner, Hong Lim Park. Chee had wanted to march from Hong Lim Park to the Parliament on Saturday 16 September but his attempt was frustrated by police who turned up in huge numbers. However, the Straits Times had reported that his standoff with police ended on Saturday night. So this wasn’t true, as he’s still there.
I’ve never been a supporter of Chee and SDP. His canvassing of support among anti-Singapore foreign press and questionable political views have never impressed me. Even then, the many instances of PAP absolutism and arrogance leads me to wonder if I too, like my fellow countrymen, have fallen victim of government propaganda. They never seem to learn that such antics are long overdue. The Gomez episode is one example. The fiasco relating to CSOs attending the World Bank/IMF conferences is another.
Anyway, a bit bored on Sunday afternoon, I went to Hong Lim Park with a friend. There he is, Chee, his sister and a few supporters are at the carpark, surrounded by maybe about 30 policemen plus a number of onlookers, the latter probably including some plainclothes policemen and members of the Internal Security Department (ISD). I took some photos, went to gym and returned 2 hours later. They were still there, plus maybe a few journalists interviewing him. A civilian-dressed man, possibly ISD agent, was videotaping the whole scene. Here are some photos taken on Sunday 17 September 2006 at about 2:30pm: 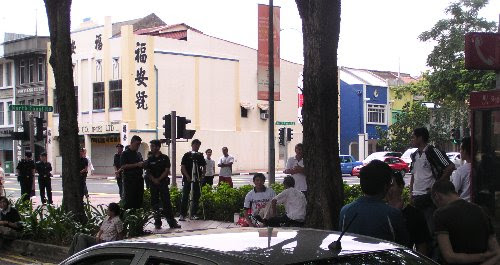