Crisis in Assam: Wee Cheng reporting the frontline from the yoni of Goddess Shakti

Crisis in : Wee Cheng reporting the frontline from the yoni of Goddess Shakti

Now in Guwahati, largest city of , . Just visited the , most sacred Hindu temple in this part of . Legend has it that the yoni, or female sex organ of the goddess Shakti, who is the first wife of the god Shiva, fell here when her corpse disintegrated after her death.  Soldiers guarded this place, as they are seen in many places in .

The state of is now under high political tension. 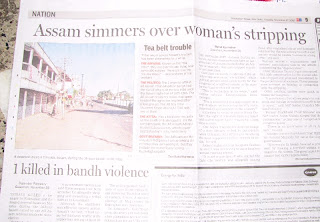 Firstly, over the weekend, there have been ULFA (United Liberation Front of Assam) separatist attacks in Upper Assam, with the aim of making an independent country outside .  Yesterday.  The ULFA is the strongest of the fifty to hundred guerilla groups in the northeast of India, and have been creating political instability in this state rich in oil and tea (yes, the famous Assam Tea).

The press also reported that rebels from the Black Widow faction of the Dima Halim Daoga (DHD) killed 8 saw mill workers in a remote district.  The DHD is a group that wants to separate North Cachar Hills from to create a Dimaraji/Dimaland for the Dimasa Kachari tribe. The DHD has been holding peace talks with the Government but the Black Widow faction was against the talks.

If the above were not already bad, what dominated headlines, however, was the bloody riots and brutal suppression of demonstrations involving the Adivasi (indigenous tribal people) originally from for Scheduled Tribes (ST) status, which would entitle them to various job and educational quotas. These Adivasis are descendants of indentured workers brought to by British colonials to work on the tea plantations, and now also known as the "Tea Garden Tribes".  Under 's complicated affirmative action laws, these Adivasis enjoy ST status in their ancestral lands in Central India but not in where they claim they have been discriminated by the native Assamese.

The Adivasis (and their many factitious rival political organizations) continued to demonstrate in Guwahati, the state's largest city on Monday where they were attacked by Assamese civilians while police watched on. An Adivasi girl was attacked and stripped naked before being rescued, the whole episode was broadcast on national TV, which sparked off more demonstrations and riots today, as well as nationwide condemnations. Local TV report the events non-stop.  The Adivasis organizations declared that they would hold general strikes and block national highways, thus paralyzing the tea districts of .   The situation is not helped by the fact that the federal home affairs minister said in Parliament that "The settlers in the tea estates have tended to lose their tribal characteristics in the new surroundings," and hence the federal government would not support any reclassification of their racial status.

Hmm… would this affect my journey to the (which lies on the edge of the tea districts) tomorrow?  Or world supply of tea?

I flew here on Tuesday from .  Few tourists come to the Northeast of India.  I am one of the three on this flight.  As I walked on the streets of Guwahati, I was not harassed by touts at all – something very rare in Indian cities, especially and cities in Rajasthan.  In fact, I even felt a little left out!  I have to shout, squeeze and fight my way to buy things or to enquire for information; whereas elsewhere in , I was mobbed by touts and conmen anxious to feed me with wrong information and overpriced deals.  Here, few people make money from tourists and so nobody gives a damn about me.

One other reason is that, there are many tribes in the Northeast who do look like me.  Though most Assamese look Indo-Aryan like rest of , there are also who look Mongoloid or Sino-Tibetan.  Before the British colonials took over in the 19th century, the region had been ruled by the Ahom, a Shan-Tai people from eastern who spoke a language close to   The Ahom converted to Hinduism and intermarried with the local Indo-Aryan and Dravidian tribes.

Furthermore, there are many other Mongoloid looking tribes in the hilly areas of as well as the six states neighbouring .  There are probably a hundred ethnic groups in the Northeast.  Historically, powers that conquered the lowlands, including the British, were not bothered about exerting their powers over the tribal areas in the hills.  Upon the independence of , however, these areas were incorporated into the new union which immediately sprung these tribes into rebellion.

As they are more or less peripheral to , the insurgencies, damaging they might had been to local development, had never bothered "metro" much.  In fact, the chances of any of these tribal rebellions succeeding are low.  The rebel groups are small and factitious, and they often split into even smaller rival groups and fight against one another.  Often, they have confusing agenda, some wanting to leave and others to set up new states or autonomous regions within so that they would not cohabit in the same state as a rival tribe.

Apart from the ULFA and Dimara insurgencies I mentioned above, the state of Assam alone is also fighting four guerrilla groups of the Bodo tribe who want their own state, such as the All Bodo Students Union, Bodo Volunteer Force, Bodo Liberation Tigers and National Democratic Front of Bodoland; plus other groups with diverse tribal causes such as the Karbi National Volunteer, Kamtapur Liberation Organisation, Rabha National Security Force, Tiva National Revolution Force who want to set up independent countries for the Karbi, Kamtapur, Rabha and Tiva tribes respectively; and other groups such as Bengali Tiger Force, Muslim United Liberation Front and Islamic Liberation Tiger Force, whose aims are too obscure for me to find out!

Political troubles and natural disasters seemed to affect places that I visit.  had since suffered from a massive cyclone disaster in which thousands died.  's political crisis is continuing.  Terrorists had bombed cities in Uttar Pradesh (UP) (with many deaths) after my visi to , located in UP.

Even in Rajasthan, Taslima, a controversial Bangladeshi writer was rushed to safety in Jaipur from Kolkata where riots broke out – Muslims there were protesting against her stay in West Bengal, where she had taken refuge after being forced to leave for allegedly writing things deemed by some as disrespectful to Islam.  On my last day in Rajasthan, just before heading for , I was woken up by an earthquake (Richter scale 4.5) with epic-centre in neighbouring Haryana state.  I wondered if that was just my imagination and whether I should run out of the hotel room.  Didn't think about it until I read about the " earthquake" in the papers on Tuesday.

On 1 December, I will head to Nagaland to attend the annual Hornbill Festival and then to Kolkata in .  Today's papers reported that an ex-Chief Minister of Nagaland had just survived the sixth attempt on his live and he complained that the federal government had not provided as many bodyguards as he deserved because he was a tribal, not from metro India.  In addition, Nagaland might face a new political crisis as a coalition partner in the local government has resigned.  West Bengal (WB) remains tense as the long-ruling Communist government under Chief Minister Buddhadeb Bhattacharya (nicknamed "Buddha") has come under attack for the brutal attack on protestors in the town of .

Basically, the WB government wants to turn 27,000 acres of land near Nandgram area into a special economic zone to construct plants for the Salim Group of .  Compensation was deemed inadequate by the local residents of several villages to be flattened for the project.  WB's police killed 14 demonstrators in March 2007 after which cadres and representatives of the Communist Party were chased out by angry villagers.  On 11 November 2007, Communist Party cadres stormed the villages around Nandigram killing possibly dozens and raping many women.  They declared the villages "liberated" and then held victory parades in Kolkata.  This was condemned by the political spectrum across and by ordinary citizens in WB.  Kolkata has since been rocked by demonstrations and riots, the latest of which prompted the deployment of Indian federal troops in downtown Kolkata.

So, life has never been more exciting, though not helped by fact that phones from elsewhere do not roam at all in the Northeast.  I'm going to suffer from mobile withdrawal syndromes.

Anyway, do stay tuned on to Wee Cheng's live report from exciting and Incredible !