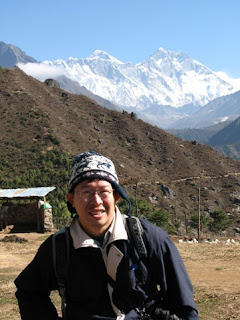 Wee Cheng at Mt Everest
3 November2007. On a hilltop army base overlooking Namche Bazar, the largest town at the foothills of Mt Everest, the world¡¯s tallest peak at 8850 meters. The icy peak behind is Mt Everest, also known as Sagarmatha to the Nepalese and Qomolangma to the Tibetans and Sherpas. The woolen cap with reindeer motif I wore was bought in Estonia in 1999, and I had worn it in my journeys to a number of cold regions, including Greenland, Peruvian Andes, Mongolia, Madagascar and Bhutan. We reached Namche Bazar (3480m) after an arduous (by my pathetic standards), tiring climb on 2 November but the skies were too cloudy for Mt Everest to be seen.
You may notice the army defence bastion behind, which I presume was built to defend the base against Maoist attacks. That is no longer useful. Parliament has already agreed to abolish the monarchy under the pressure of the Maoists and red flags are flying in the many villages in the Mt Everest region and all over the country.
Nepal Odyssey2

Unknown said…
I know the spot where you are standing. The army base has been there a long while. There's a great rock to take photos from with Everest in the background as you show here. That very spot is mentioned a number of times in my book about the Sherpas. Much of the story takes place in Namche and it all takes place in the Khummbu.
Sherpas are the true heroes on Everest. One third of all deaths on the mountain have been Sherpas but one rarely learns of this. To learn more about this amazing tribe that makes climbing Everest possible, read Beyond the Summit by Linda LeBlanc. Details of Sherpa culture and religion are interwoven in a tale of romance and high adventure. The story has something for everyone: a love affair between an American journalist and Sherpa guide, conflict between generations as the modern world challenges centuries of tradition, an expedition from the porter's point of view.

Below are selections from reviews. To read the complete ones and excerpts go to www.beyondthesummit-novel.com

Beyond the Summit, is the rare gem that shows us the triumphs and challenges of a major climb from the porter’s point of view. The love of two people from diverse cultures is the fiery centerpiece of a novel that leads its readers through harshly beautiful and highly dangerous territory to the roof of the world. Malcolm Campbell, book reviewer

Conflict and dialog keep this gripping story of destiny, romance and adventure moving from the first page to the last paragraph. LeBlanc has a genius for bonding her readers and her characters. I found I was empathizing in turn with each character as they faced their own personal crisis or trauma.
Richard Blake for Readers Views.


A gripping, gut-twisting expedition through the eyes of a porter reveals the heart and soul of Sherpas living in the shadows of Everest. EverestNews.com

A hard-hitting blend of adventure and romance which deserves a spot in any serious fiction collection. Midwest Book Review

LeBlanc's vivid description of the Himalayas and the climbing culture makes this a powerful read. Rocky Mt News Pick of the Week

A rich adventure into the heart of the Himalayan Kingdom. Fantastic story-telling from one who has been there. USABookNews.com

This is the book to read before you embark on your pilgrimage to Nepal. The author knows and loves the people and the country, and makes you feel the cold thin air, the hard rocks of the mountains, the tough life of the Sherpa guides, and you learn to love them too. This is a higly literate, but also very readable book. Highly recommended."
-- John (college professor)

Memorable characters and harrowing encounters with the mountains keep the action moving with a vibrant balance of vivid description and dialogue. Literary Cafe Host, Healdsburg, CA

This superbly-crafted novel will land you in a world of unimaginable beauty, adventure, and romance. The love story will keep you awake at night with its vibrant tension and deep rich longing. Wick Downing, author of nine novels

Such vividly depicted images of the Everest region and the Sherpa people are the perfect scenario for the romance and adventure feats narrated. It's a page-turner, so engrossing you end up wanting to visit Nepal! Not just novel, but perfect for those seeking to get acquainted with the culture of this country.
By Claudia Fournier (América, Bs. As., Argentina)
11:17 PM