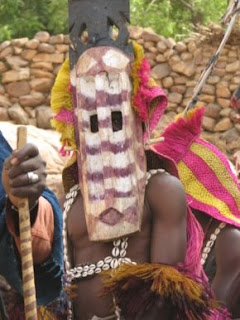 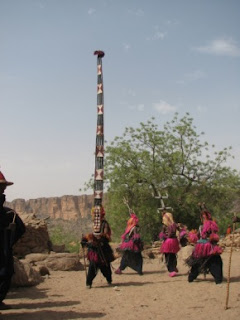 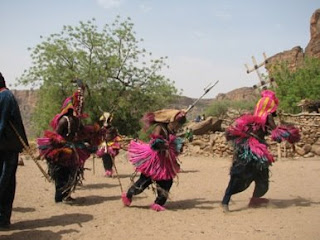 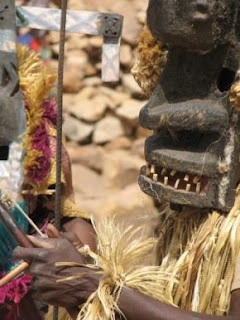 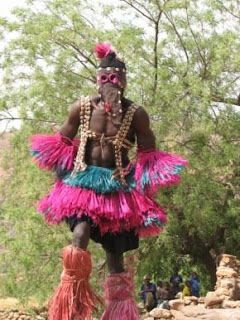 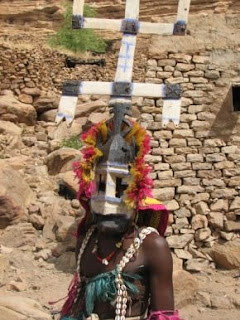 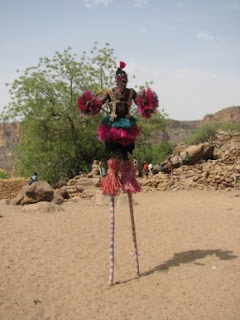 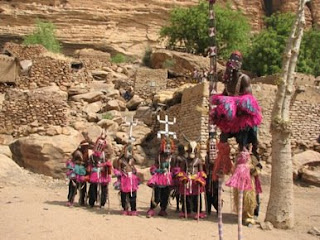 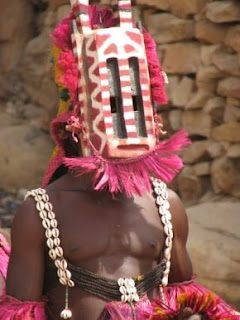 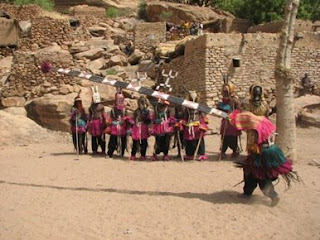 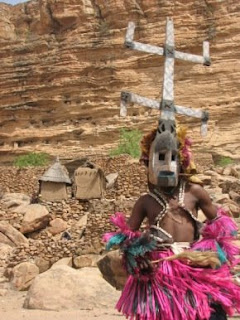 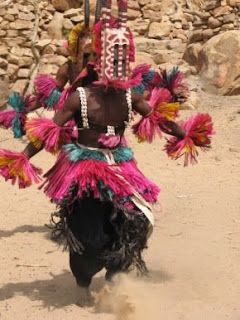 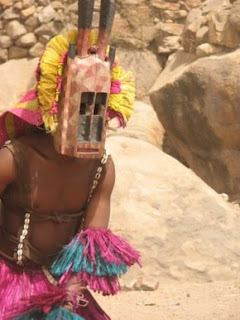 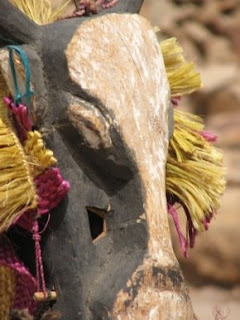 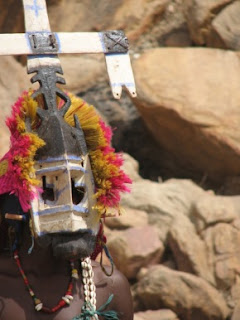 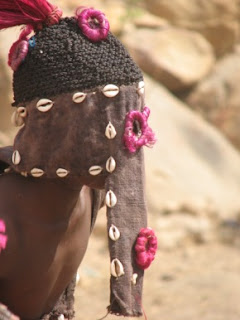 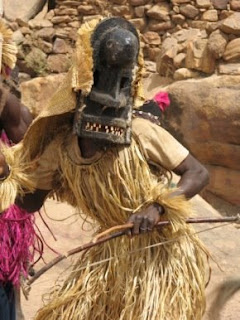 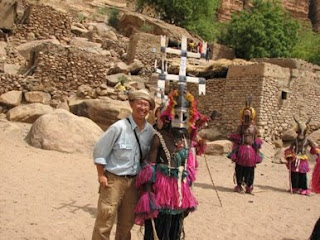 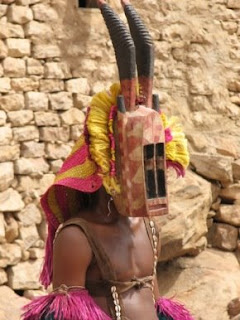 Still in Mali, West Africa. Here is an account of a ritual mask dance I sponsored in the Dogon Country of southeast Mali, which is well known among anthropologists:

I have long read about the Dogon ritualistic masked dances which are staged during religious festivals and funeral rites for highly respectable village elders. Although artistic masks are produced in huge quantities by the Dogons these days for sale to the tourist and art markets, ritual masks are not taken lightly by them. In fact, Dogons believe that spirits and ancestors reside in the ritual masks kept in caves located on the cliffs high above their villages. Any performance of ritualistic dances not undertaken for the purpose of rituals and religious festivals must be carefully treated to prevent offending the many taboos associated with the rituals, as well as the ancestors and spirits residing in these masks.
A few Dogon villages in the region do perform dances for tourists but appropriate sacrifices must be made before the dances and consent from the spiritual world sought. The justification to perform the dances for such purpose is inevitably economic but it is a decision the community take in conjunction with higher spiritual powers.
I have long wanted to watch a Dogon mask dance but no festival was forthcoming. I put forward my request through my guide and a performance was arranged for a princely sum of FCFA 85,000 (before total package discount / the raw price is about Euro 129). I reckon this is the amount one pays for a good musical performance that comes to Singapore from time to time, or a seat in a classical concert. Over thirty people performed for me, not just for this ritual mask dance but a "women's celebratory dance" was also thrown in for good measure. You wouldn't get that for Euro 129 for a musical or concert. Half the whole village turned out, especially the women and uninitiated children, who are forbidden to see the real ritual dances. A young French tourist present also asked if he could watched despite not having paid for the performance. I was okay with it and the villagers asked him to pay a token FCFA 7,000 (11 euros) to buy millet beer for the villagers.
Ritual sacrifice and preparation took place in sacred ground behind the village and I was not permitted to watch it. I was ushered to the performance grounds located on a high part of the village, with soaring cliffs above us and a spectacular view of the Bandiagara Escarpment. The hogon, or spiritual leader of Nomburi village, an elderly man of undetermined age, turned up and stood beside the drumsmen. The drum beat and the mask dancers stormed into the venue. Unfortunately, everyone was so caught up with the performances that very little was explained to me. With the loud music and drum beats, I also had difficulty understand the highly French-accented English of my guide, plus his frequent slide into French per se, which I do not understand.
Nevertheless, the group included the renowned prostate snake mask which is more than 10 meters tall and the characteristic kanega (or Dogon cross) mask, both of which signifies spiritual knowledge and magical power of the ancestors and spirit, and included symbols of the Dogon creation legend and how their ancestors landed up in what is today the Dogon Country. The performance ended with everyone kneeling down for prayer and blessing by the hogon, in what was obviously a ceremony of great spiritual significance although performed and paid for by a tourist. The hogon thanked me profusely for the sponsorship of the performance and said the money paid would be put to good use by the community.
Mali Odyssey2 West Africa