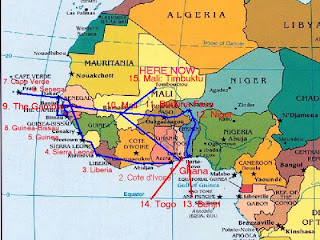 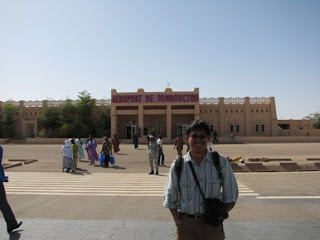 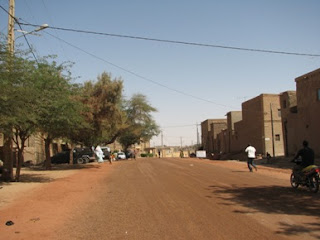 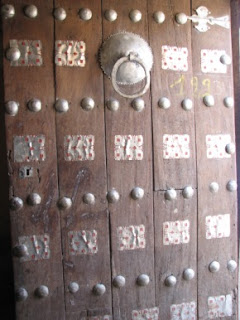 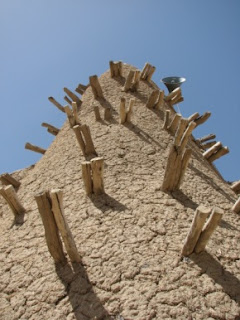 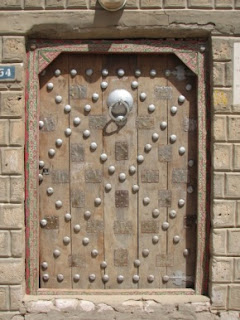 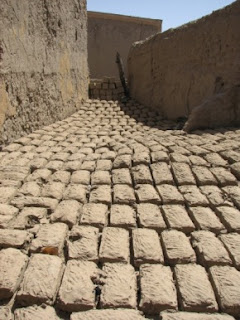 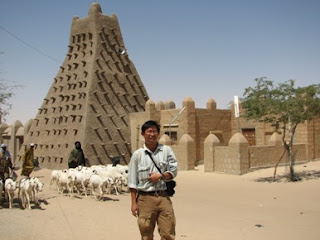 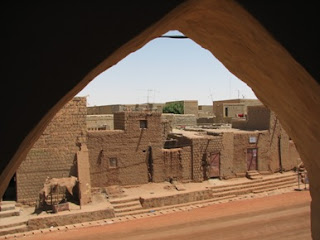 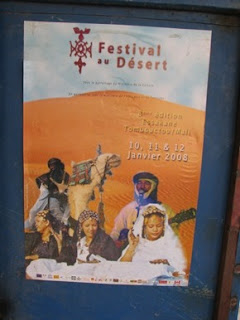 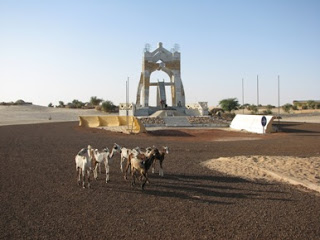 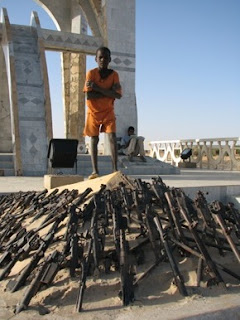 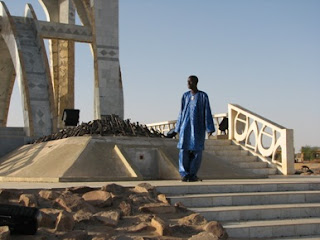 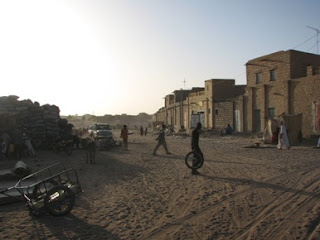 Flew here from today on . First impressions were magical. Rolling sand dunes, Tuareg tribesmen in their flowing blue robes, camels and Sahelian style mud brick mosques. This is the city we all heard of since young but knew next to nothing about. The other passengers on the plane, which included Canadians, Americans and French were equally excited.

Also met a Franco-American couple plus their baby boy on their way to Gao to work with a NGO. They said that Gao itself is currently safe although the road between and Gao is said to be dangerous. Indeed, the staff at Tamana Hotel told me that there is risk of Turaeg attacks in the Gao region.

Upon arrival, a half-Turaeg-Songhai guy named "Alibaba", obviously a member of the local tourist syndicate aka mafia, picked me up and I negotiated a price (CFA 2500) for a motorcycle ride into town. I had wanted to get a taxi but he said they would only use the taxi for larger group of people. The other people on the flight all had advanced reservations at hotels.

When we reached Colomb Hotel, Alibaba tried hard to sell his guide services. After I dumped my luggage, we walked next door to the tourist office where Alibaba showed me his photo on the tourist office's register of travel guides. In my presence, the official at the tourist office also concurred with Alibaba's assertion that new rules require tourists to walk around town with a guide, as too many tourists had upset locals by taking photos indiscriminately. With a guide, permission to take photos would be more readily granted. No choice but to agree to a half day guided tour for CFA 10,000. I also made a booking for a seat in the 4WD to Mopti on Monday. Although most attractions in can be seen in one day, I have decided to stay an extra day as I am totally worn out, especially after the very hectic month rushing around West African capitals and then the early morning flight here which meant I had to get up at 4:15am.

Oh yes, got a stamp on my passport at the tourist office. Went to the post office and sent a number of postcards, then walked around various attractions in town, such as the mosques, museums, historical houses, etc. Alibaba tried desperately to get me to do a "special" salt caravan sunset tour for CFA 50,000 (in contrast to the usual sunset tour which costs CFA 10,000) and a hippo river boat ride for CFA 250,000 (which got slashed down to CFA 60,000 when I protested about the price). This wasn't my first trip overseas and I opted for a simple usual sunset tour instead.

is very Islamic. Some women even cover their faces like conservative Arabs. Everywhere I went, I greeted people salaam aleikum instead of the usual bonjour in French-speaking . I had interesting with a group of Tuaregs and they invited me to their encampment near the Grand Marche. Had tea with the Tuaregs while they spoke about their long caravan trek to 's remote northern salt mines, as well as Merzouga and Fes of Morocco, to which I delighted them by telling about my own visits to these places in 1999. At the , we came across a renowned singer doing a MTV. Cool place, huh?

Lunch at the hotel, followed by a nap. Very, very tired. Unfortunately, I could not take a shower as the water supply in the hotel was suddenly cut. In fact, I was to discover that water supply in the whole city would only resume in the evening. I met a few upset French people who had just arrived at the hotel hoping for a good shower, after 3 days of canoeing on the River Niger.

, located in the , breathe and smell of sand. None of the roads were sealed and the whole place is dusty and sandy. A layer of sand settled all over me – face, nostrils, hair, clothing…all over! is also an intensely hot place. It's dry heat and so one doesn't perspire. Instead, one just gets dehydrated very rapidly. My throat got very dry within a short while. I walked around the city with a bottle of mineral water, drinking it along the way. One bottle finished, then the second bottle gone as well. I don't even need to pee. All the water I drank just got evaporated with the dehydration. Water is not cheap here. A bottle costs between CFA 1000 to 1500 relative to the CFA 250 to . Water is gold in the desert!

By the way, when the water came in the hotel, it was gloriously golden-brown. Should I used the expensive mineral water to brush my teeth?