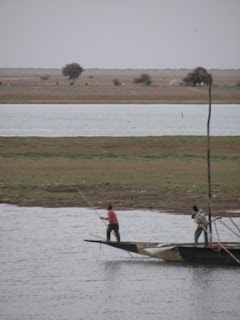 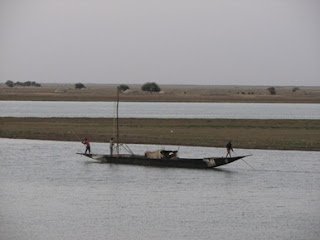 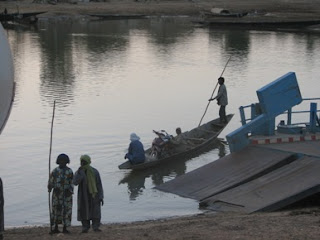 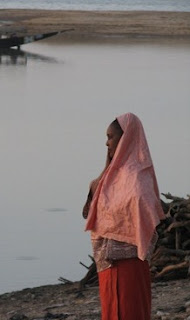 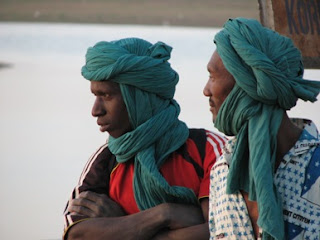 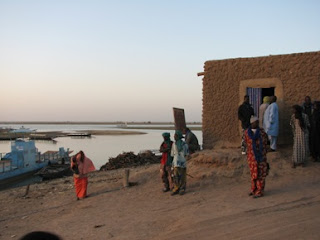 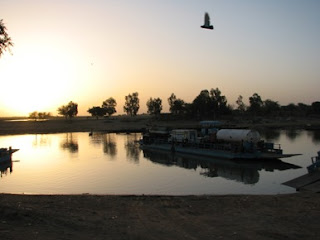 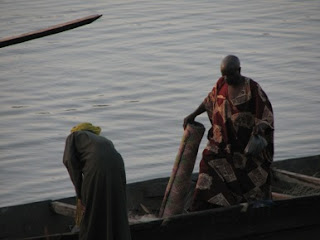 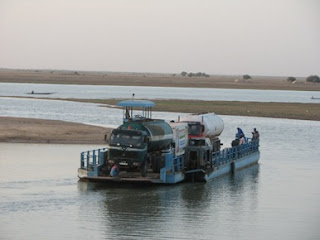 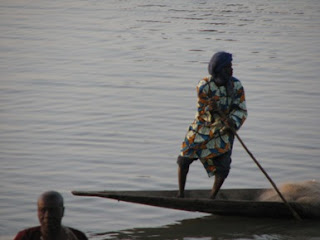 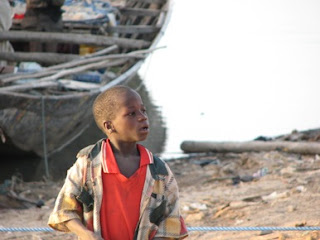 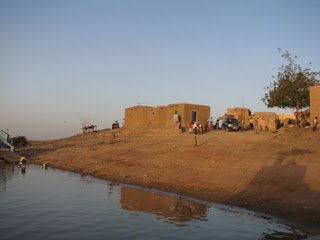 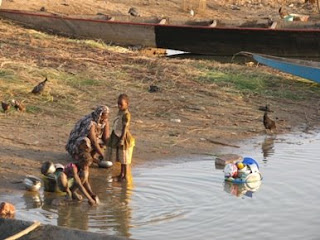 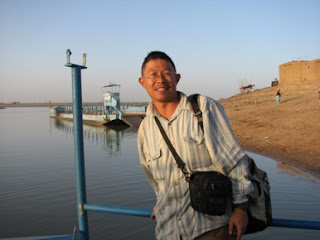 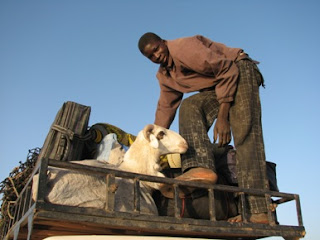 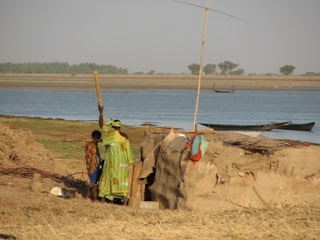 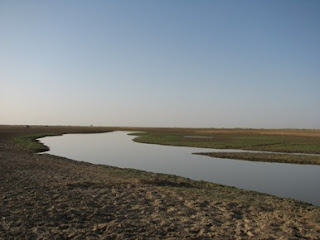 AT , a 4WD picked me up at my hotel in . I was the only foreigner on this vehicle with 12 passengers. I paid a bit more for a seat in the front, which was more comfortable than those behind. The seat also gave me a view from which photos could be taken. By , we were at the bank of the . Here, a queue of vehicles had been formed, waiting for their turn to be taken across the river on a barge.
The is one of the world's great rivers along which empires had risen and fallen, and where two hundred million people across , , , and live along its banks. The sun rose across this dry, arid region, casting its rays onto the river and the sand dunes that line its northern shore, the faded savannah green on its southern shore and the many small islands that dot this wide river.
Fishing boats and cargo barges were already busy on the river by this point. Passenger canoes made their way in both directions, carrying tradesmen and commuters who wore the colourful traditional dress of the many ethnic groups who live around here – exotic names such as the Tuareg (lords of the Sahara), Bambara (the largest ethnic group and the ruling power of Mali), Fulani (nomadic former Islamic jihadis of the 18th and 19th century who converted most of the Niger Valley to Islam), Senoufo, Songhai (descendants of empire builders), Bozo (nomadic fishermen), Dogon (with their world-famous unique cultural heritage) and many more. The more pious Muslims among the crowd, who had just completed their first morning prayers, were sipping tea on their prayer mats, while the ever-present entrepreneurial African mamas were setting up stalls by the jetty side.
My 4WD driver took the opportunity to negotiate with local traders and get the vehicle rooftop loaded with more cargo – a live billy goat now sat on the rooftop cramped in by the already numerous bags, suitcases, salt slabs from northern Mali and assorted merchandise. The vehicle's centre of gravity was further raised, to an extent where any sharp turn taken by it had the potential of tilting the vehicle over. Indeed, anyone on any typical long distance journey in Africa would have noticed the many wrecks of over laden vehicles that litter the continent's roads.
Huge oil tanking trucks from drove off the arriving barge, followed by bush taxis and assorted motor bikes. Traders and 4WDs from like mine drove onto the barge and across the . I am delighted to be here. One century and a half ago, the valley had just been conquered by the Fulani nomads and their jihadist sultans were adamant that no infidels should ever enter their domains. A few explorers that wandered in were captured and killed mercilessly. The lack of information and Western presence in the region fuelled wild and impossibly fantastical tales about the legendary cities of Timbuktu, among others and their wealth, which by that time, had actually declined significantly, leaving behind mere crumbling ruins and decaying edifices. By the end of the 19th century, the French empire marched in, and brought this isolated region, for better or worse, into world civilization.
Over the other shore, it would be a hard drive across treacherous tracks on the plains, dusty sandy track in some areas and sticky mud in others. Another six hours before reaching the sealed road at Douentza, then three hours more before reaching Mopti. From Mopti, I got onto a bush taxi to Bandiagara, but not before dealing with one of those annoying tout aka self-appointed guide cum let-me-help-you-guy.
Bandiagara is the unofficial capital of the Dogon Country. I checked into Hotel de la Falaise, where I negotiated for a rather expensive tour of the Dogon Country with Habibou Tembely (aka Bebe), a Dogon guide who speaks English. Not sure if I could have done better in other circumstances, but I was tired and worn out. A 4WD instead of a hard core trek would do me some good here.
Mali Odyssey2 West Africa