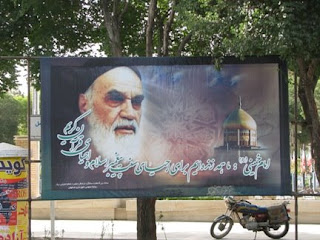 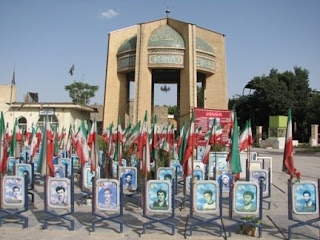 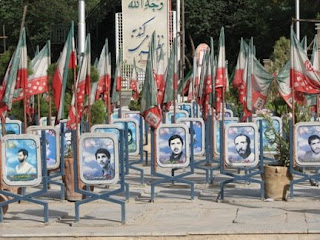 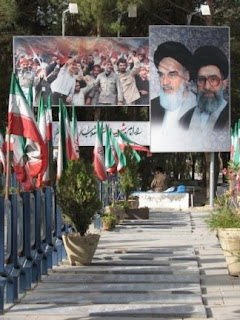 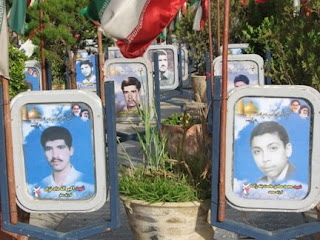 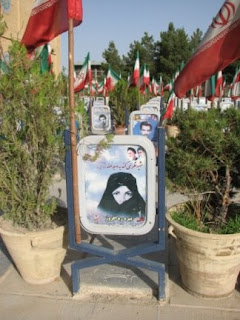 The cemetery for those who died during the Iran-Iraq War of 1980-1988. 500,000 people from each side died in this terrible conflict which began when Saddam Hussein of invaded at the wake of the Iranian Islamic Revolution, with the aim of capturing 's oil rich . One whole generation in , i.e., "The Lost Generation", died in this war. Golestan-e Shohada, or of , is 's war cemetery. Most of the dead appeared to be young men in their prime, and some tombs even had photos of teenagers and children. It was a moving scene, watching elderly ladies placing flowers by the tombs or sitting quietly by the resting place of their loved ones.
There were many huge boards with old photos of young men at war. I wonder how many of these are still alive today. Those smiling young faces holding rifles, by the canon, in diving suits, in the swamps… sent to the battle field as canon fodder. Also present were images of the two chief ayatollahs and various patriotic messages rallying for the current regime. One wonders if the war had been fought longer than necessary, and how long the regime can uphold patriotic fervor by constantly reminding the nation of the war.
Iran Middle East Odyssey2