Imam Husayn & the Battle of Karbala 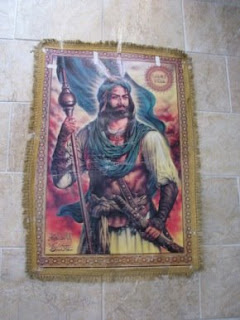 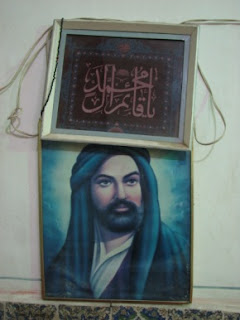 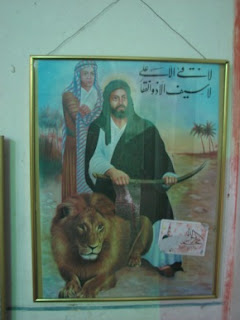 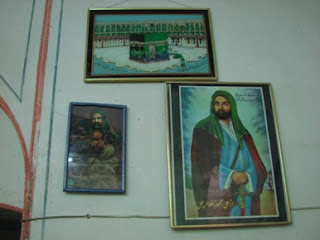 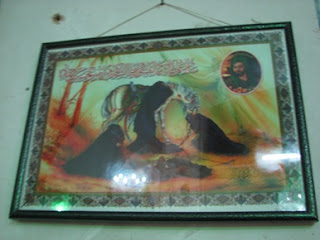 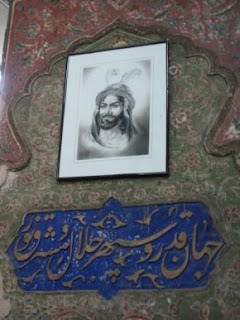 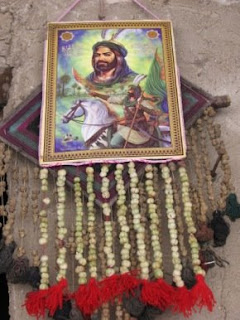 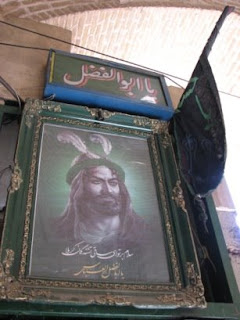 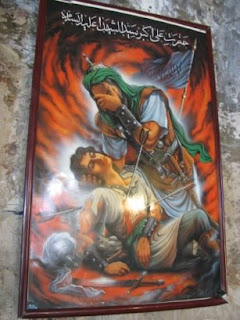 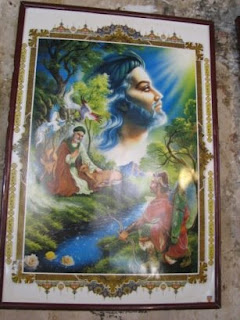 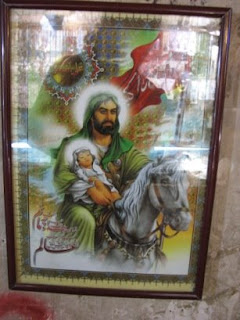 Across shops and bazaars in , one comes across portraits of Imam Husayn, the grandson of Prophet Muhammad. He is usually portrayed as a handsome, dashing figure, on a horse, or with horsemen behind him. Killed at the battle of (in today's ) on 6 October 680 A.D. by soldiers of Yazid I, the Umayyad calip based in , Husayn is the foremost martyr of Shia Islam, the predominant Islamic sect of . The anniversary of his martyrdom is called Ashura, and it is a day of mourning and religious observance among Shia Muslims. Black flags raised everywhere and processions are held in which participants beat their chests and wailed to mourn this event that occurred more than 1300 years ago.
Shia Islam sees the family and descendants of Prophet Muhammad as his rightful political and religious heir, whose rightful inheritance of political leadership was robbed by the Umayyads (whose political position is held by today's Sunni Islam). When in 680 A.D., Husayn and his family and companions – including 72 adult men - marched from to Kufa where many people supported his cause, Yazid I sent an army of 4000 against them.
Husayn and his entourage were besieged on the desert at , where they ran out of water, and then slaughtered one by one. Eventually, all 72 men and 51 children were killed, leaving only a few female members of the Prophet's family. The Battle of Karbala is a rallying cry for all Shia Muslims, and Shiite account of the battle includes tales of individual bravery, providential acknowledgement of such courage, indescribable cruelty on the side of the enemy Sunnis (involving killing of infants, mutilation, beheading, among other acts). The martyrs of , together with other followers and descendants of the Prophet's family who were killed in subsequent years by the Umayyads, are mourned every year and their shrines have become major pilgrimage centres. The Iranian and Shia calendar is full of numerous of such mourning days that black flags are flown everywhere for large parts of each year.
Husayn is sometimes shown carrying a baby in his arms, with an arrow through the baby and into his arm. The baby portrayed here is Ali Asghar, Husayn's infant son. Husayn's entourage had grown so thirsty during the siege that Husayn carried his son towards the enemy, asking them for water for the children. The enemy shot an arrow instead, which went through the baby and into Husayn's arm. Ali Asghar is often described in Shia literature as the manifestation of innocence and purity, and his death is seen as the evidence of the cruelty of the Sunnis, who could not even spare a baby.
There is also the story of Husayn's brother, Abbas, who went to the river in search of water for Husayn and was attacked. His companions were all slaughtered but he managed to get a bag of water and on his way back to the camp, his right hand was cut off in an ambush. The water skin (or bag) was then hung onto his left shoulder (don't ask me how) as he continued his way back. Then he was attacked again and his left arm severed as well. But he persisted, biting the water skin in his teeth, until an arrow hit and burst the water bag. Another barrage of arrow shot him off his horse. As he died, he called out his brother's name.
There are also other stories involving Husayn's eldest son and horse, plus other individual companions as well, all highlighting their bravery and readiness to die for Husayn and the Prophet's family. Despite graphic performance of any kind is seen as un-Islamic, passion plays similar to those performed in Christian Europe during the Middle Ages are regularly held in , portraying the battle of and the terrible martyrdom of Husayn and his family and followers.
As noted in Wikipedia, "The saying, "Every day is Ashura, every land is ," is a reminder to live one's life as Hussein did on Ashura, with total sacrifice to Allah and for others. This saying also signifies "We must always remember, because there is suffering everywhere""
Any Shiite is familiar with these tales and even the less religious among them will get somewhat emotional and charged when recounting this historical event. This is hardly surprising given the mourning that goes on for much of the year. The Battle of Karbala remains a thorn between Sunni and Shia Islam, and between modern nation states such as and on one side (Sunni) and Shiite Iran on the other.
Iran Middle East Odyssey2