Hosting My Russo-Chinese Friends & Being Philosophical About Friendships 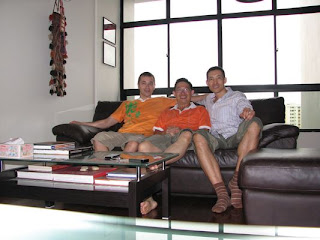 Last weekend, Wenjie and Andrei of Vladivostok, Russian Far East, visited me and stayed at my place during their three day stopover in Singapore on their way to Bali.  I met them while travelling overland from London to Singapore in 2002.  They hosted me when I was in Vladivostok, Russia's largest city on the Pacific Coast, a pleasant city also known as "San Francisco of the Russian Far East" due to its hilly geography and strategic harbour.
Wenjie was born in Mudanjiang, Heilongjiang Province, Northeast China and studied in St Petersburg, Russia.  A typically tall and goodlooking (typical "Dongbei Shuai-ge", I suppose) broad-frame guy typical of his native region, Wenjie has been living in Russia for many years and runs a food import-export business.  He speaks Russian fluently and is now a Russian citizen.
Andrei, a friendly blue-eye guy, was originally from the European part of Russia - specifically the Volga Region - his father actually belongs to the exotic 2-million strong Chuvash ethnic group, which is related to the Turkic-Altaic group of languages.  He had initially come to Vladivostok as a Navy dentist but now runs his private practice.
Coincidentally, I met them again in Sanya, Hainan, Southern China in Dec 2004 when they were vacationing in what is for the Russian Fareasterners a favourite escape from the harsh Siberian winters.  I was then visiting my ancestral village for the first time and detoured to Sanya to see the place Miss World was hosted four times.  It was a coincidence that we were in Hainan at the same time.
We have kept in touch on and off via email.  This time round, they wanted to see Singapore on their way to Bali.  It was wonderful catching up and bringing them around Singapore.  They stayed at my place and were wonderful guests.  With ET, I enjoyed showing them my hometown, as they did when I was in Vladivostok.  Oh yes, they were most enchanted by the lush greenery in Singapore as well as the numerous variety of flora here.
We all agreed that we got along really well because there was Yuan-Fen (缘分) - This is a difficult term to translate into English - some translates that to mean fate, predestination or predestinated relationship.  But the real meaning probably relates to friendship between people who would otherwise not have met or connected closely due to geographical distances or natural differences.  As the Chinese love to say: 有缘千里来相会，无缘对面不相逢 - If you have yuan-fen, you would travel for a thousand li (an ancient Chinese measure roughly equivalent to 500 meters) to meet.  But if you have no yuan-fen, you would not even recognise each other when you are face-to-face.
Friends