on January 11, 2009
After a quick visit to Kampong Buangkok, we drove to the end of the road at Ponggol Point, from where we could see Pasir Gudang Port of Johor, Malaysia, as well as Pulau Ubin and Pulau Serangoon.  According to WIkipedia:

"Punggol Point or Tanjong Punggol appears as Tanjong Rangon on Franklin and Jackson's 1828 map of Singapore. Punggol, also spelt as Ponggol, means "hurling sticks at the branches of fruit trees to bring them down to the ground" in Malay. It could also refer to a place where fruitsand forest produce are offered wholesale and carried away. These possible names indicate that Punggol was a fruit growing district. The place is said to take its name from the river Sungei Ponggol. Yet another interpretation is that it is a rendezvous point for those who await the wholesale agent who buys and takes the produce to the market.

Ponggol also means "a stump of a tree", especially "a high stump". There are suggestions that the word is Tamil (Pongal, "the feast of the boiling rice", is celebrated when the sun enters the sign of Capricorn), but the word is clearly Malay and not Tamil."

Ponggol in Chinese is , 榜鵝 the second word of which means goose.  It is for this reason that an image of a goose always flashes across my mind whenever someone mentions Ponggol.  Ponggol lies in a northeastern part of Singapore where few people visits.
The government has built a huge HDB housing estate there but few have yet to settle there.  Many flats have remained empty, but I guess it would probably fill up in due course like Tampines, especially given the government's plan to increase the population to 8 million!  After all, the impressive MRT infrastructure is already ready there.  For the time being, Punggol is well known among Singaporeans for its seafood and the Ponggol Mee Goreng (Fried Noodle), the latter of which is almost certainly consumed more in other parts of Singapore than in Ponggol itself.
Many people spent the lazy afternoon fishing there, in full view of the huge cargo ships and oil platforms at the Johor port of Pasir Gudang.  A few coast guard sat watch in a small guard house at the tail end of the road and a police boat patrolled this stretch of narrow coast.  The Johor coastline is so near that ET didn't believe the port facilities the other side was Johor.
There was a directional sign indicating the site of Japanese massacre of 400 Singaporean civilians during WWII but we could not find the actual spot itself.  Perhaps so few people visited the spot that any heritage signboard that exists have been obscured by the bushes and trees.
One could see the lush greenery of Pulau Ubin from here and a picturesque kelong sat in the shallow waterways that not far away from the site of fierce navy battles between Portugual, Aceh, Jambi and Johor in the traumatic years of 1535, 1564, 1576, 1578, 1582, 1586, 1613 and 1673.
The natural coastline of Pulau Serangoon once played host to nomadic seamen such as the Orang Seletar, a sub-tribe of indigenous Proto-Malay peoples called the Orang Laut (literally sea-people), who were one of the original inhabitants of Singapore.  Often accused of piracy, these peoples were also once the loyal subjects of the sultans of Melaka and Johor.  The Orang Seletar have long disappeared from the industrial heartland of Singapore, and so had the natural coastline of Pulau Serangoon, now paved with ugly stone and concrete steps, perhaps to prepare for the eventual transformation of the island into an urban waterfront playground of an expanded Ponggol New Town.
We also walked to the Marina Country Club, a huge leisure complex with its own marina at the dammed mouth of the old Ponggol River.  Now even Pulau Ponggol Timur and Pulau Ponggol Barat are joined up with the main island of Singapore.  Families and lovers of watersports spent a leisurely afternoon here, either engaged in watersports, prawn fishing or simply having endless cups of kopi and teh.  I briefly contemplated having a plate of the well-advertised Ponggol Mee Goreng here but resisted the temptation on account of my dieting efforts.
And there goes a short visit to Ponggol at the northern frontiers of our tiny motherland. 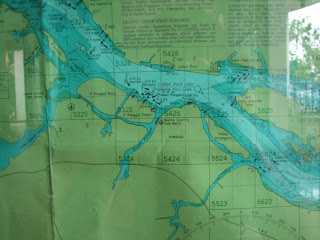 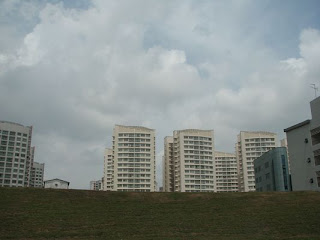 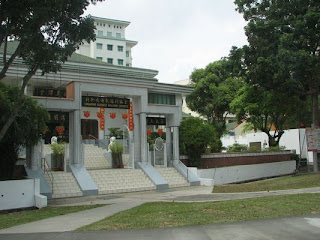 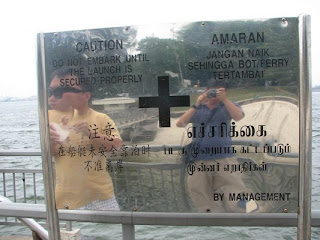 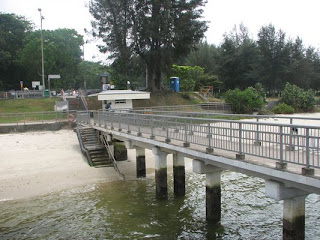 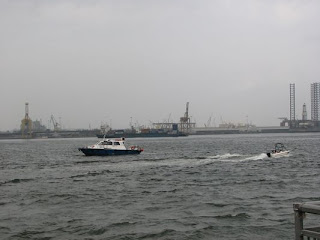 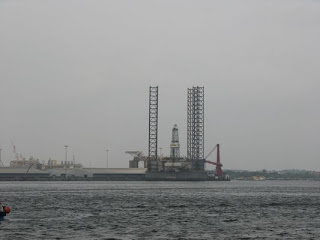 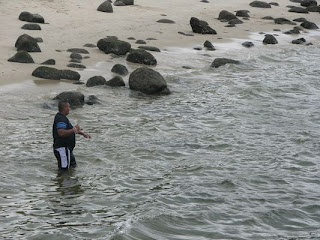 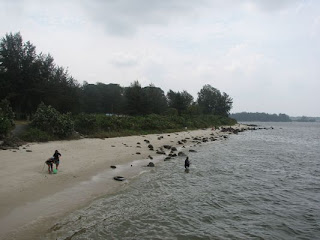 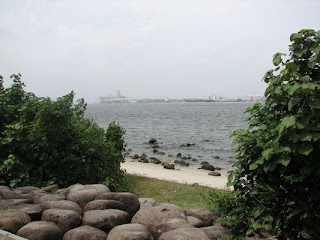 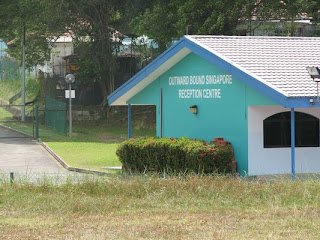 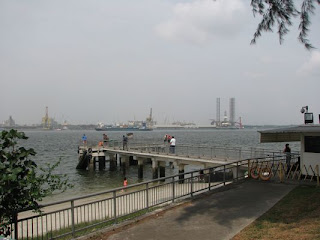 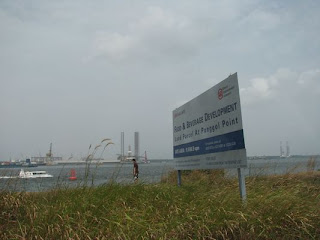 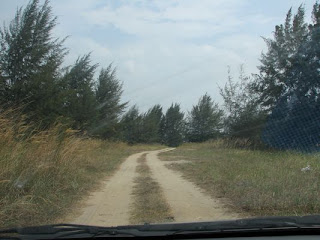 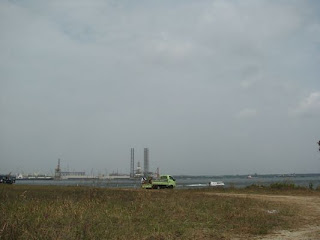 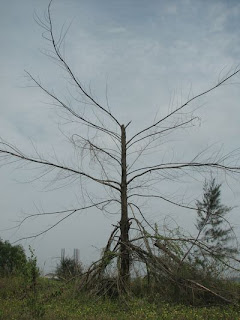 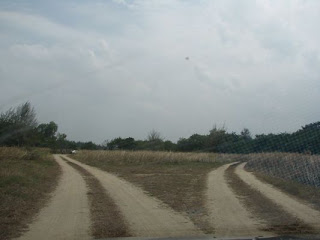 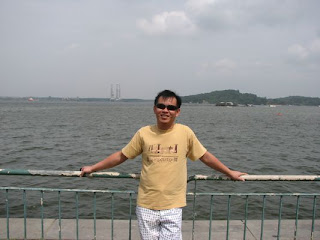 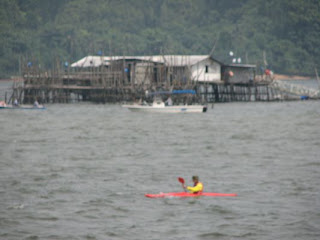 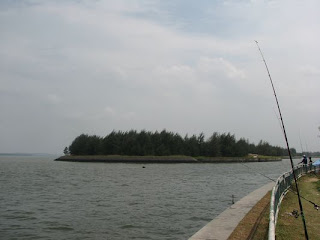 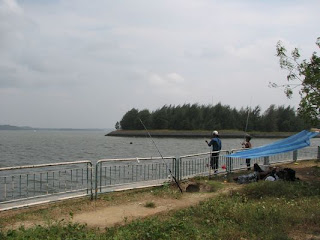 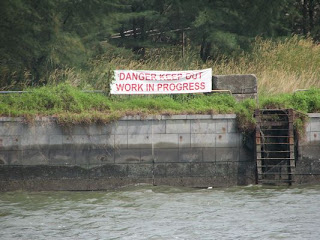 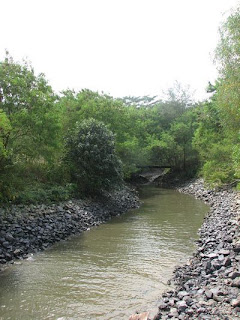 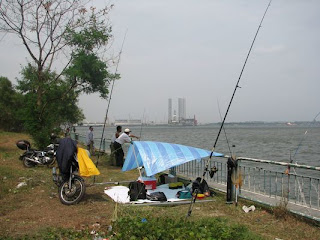 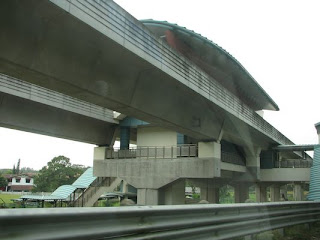 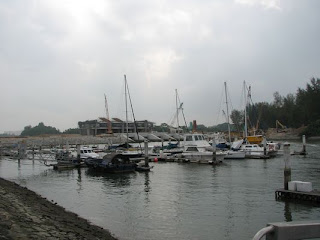 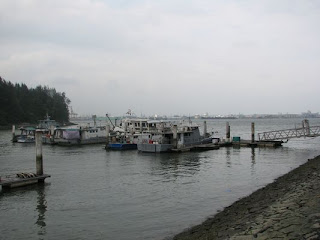