I visited historic Port Royal today. Located at the tip of a peninsula guarding the entrance to Kingston Harbour, Port Royal was once the capital of the English colony of Jamaica. The city was established shortly after the English captured Jamaica from the Spanish in 1655, and soon became the centre of operations for buccaneers aka pirates in the Caribbean. The English government at that time had insufficient naval and financial resources to safeguard its new possessions in the Americas and governors in these farflung regions had to protect themselves by granting licenses to buccaneers to attack the ships of Spain and any other unfriendly nation.
This was the golden age of piracy and the enormous wealth looted from Spanish American soon enriched Port Royal. It was said that the mansions of Port Royal were lavish and exuberant, and the rental of homes rivaled that of the pushiest business district of London. Not only did trade and piracy flourished in Port Royal, vice was in abundance too. Whores entertained pirates on shore-leave and gambling dens saw the making and loss of fortunes. It was said that Port Royal was “Sodom filled with all manner of debauchery.” Other writers called it the "Wickedest City in the World".

All came to an end on 7 June 1692, when a massive earthquake struck Port Royal, which brought two-third of the city under the sea. Over half the inhabitants died in the quake, aftershock and resulting tidal waves, and the survivors moved to the other side of Kingston Harbour, where they founded the city of Kingston. The more superstitious of those days called it God’s punishment for the city’s sins – not unlike statements of a well-known religious fundamentalist in Singapore who was alleged to have said that the 2003 SARS debacle was divine punishment of Singapore’s transgression of god’s rules against abortion, or of an American preacher statement that Katrina was his god’s punishment for America’s sins.

Archaeologists have since discovered many artifacts from the 10% of old Port Royal under the sea that had been excavated. It is believed that more exciting finds still lie at the bottom of the sea, covered by sand and mud for over 300 years.

I got to Port Royal on bus 98 from Parade in Downtown. Port Royal was once a tiny narrow sandbar island but a causeway has since been created linking it to the main island of Jamaica. A road links Kingston with Norman Manley International Airport, which then extends westwards to Port Royal. Port Royal is today a sleepy village with 1200 inhabitants. The only relics remaining of old Port Royal was Fort Charles and a few churches. Even then, the Fort Charles we see today had been rebuilt, remodeled and modified substantially over the years, especially after a few more earthquakes and disastrous hurricanes.

In the museum within Fort Charles, on display were not only everyday items used in old Port Royal in its glory days but also a small Chinese-style stone lion and a blue-white clay cup from Batavia of Dutch East Indies (i.e., Jakarta, Indonesia). These Asian artifacts were probably acquired by merchants in then Spanish-ruled Philippines, shipped across the Pacific Ocean to Acapulco, Mexico, transported overland to the Caribbean port of Veracruz, loaded onto vessels meant for Spain but eventually landed in Jamaica after these vessels were captured by pirates. Amazing race round the world only to end up in a museum here, isn’t it?

There was a plaque in the fort dedicated to Admiral Horatio Nelson, who, at the age of 19, was posted to this lonely fort in anticipation of a French attack which never came. It was here that his leadership and charisma were noticed, and before long, he was appointed commander of the garrison.

I walked around the quiet village of Port Royal, now even more so after the cessation of a ferry service to Kingston. I waited in the village square for the return bus to Kingston but none appeared for 45 minutes. A pickup truck driver offered to bring everyone waiting at the village bus stop a free ride to town. And there I was, at the back of a pickup truck, with two fishermen with that distinctive smell of the sea, a Rasta lad with his colourful hat and a loud large-bosom mother with two equally loud young sons.

Back to Parade, had jerk chicken at a Jamaican fast food restaurant chain called Mothers, then took a coaster back to New Kingston. Jerk refers to a sauce that is the most popular ingredient used to marinate meat in Jamaica. The sauce is made from various spices and can be mildly peppery. Once marinated, the meat is cooked over flame in a method first began by the Taino Indians and then adopted by the Maroons, i.e., escaped African slaves, and then by the entire population of Jamaica at large. Also served together with the jerk chicken were Johnny cakes, which can perhaps be described as a cross between Singaporean humjingpeng (but with more "substance" to bite) and a kind of fried muffin! I adore these…

Yes, parts of the city looks like urban wasteland and bus drivers speed through them maybe hoping not to get hijacked by robbers. At one bus station with a prolonged stop, I saw conductors of two buses fought over a lady and her young daughter. They shouted at each other and each pulled one arm of the crying girl, trying to get customers for their bus. They only stopped when one driver gave up the tug of war but he could well have taken out a pistol and shoot at the other guy. Minutes later, while at another stretch of town, a passenger standing precariously on the entrance steps fell off the bus. The bus screeched to a halt as the conductor and another passenger stepped out to help the fallen young man. Fortunately, he did not appear too hurt though completely dazzled, and we continued the journey after getting some ice to sooth his injured arm. Life is always on the edge in a place like Jamaica.

Back in New Kingston, I bought a wonderful book, In Search of Buccaneers, by Anthony Gambrill, about an extraordinary historic period when pirates roamed the Caribbean, fighting proxy wars on behalf of Spain, England, France, Netherlands and other powers. I also had the famous Jamaican Blue Mountain coffee at a nice café. Grown in the inland mountains at altitude of between 910m and 1700m above sea level, the Blue Mountain coffee is one of the world’s most expensive and sought-after coffees.

Kingston, Jamaica is the murder capital of the Caribbean. TV news in the restaurant just reported 5 fatal shootouts today, including one in which many passersby were also injured, another one where police execution of a suspect was alleged to have taken place, and most shocking for me, one in which a New Zealander consultant was killed when a robber demanded his mobile in a guesthouse lounge. I quickly changed my dinner order to takeaway to return to my hotel before it gets too dark. And then locked the door tight... 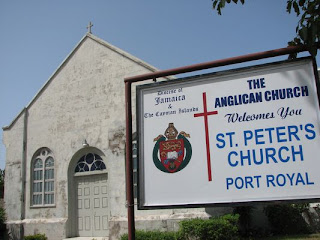 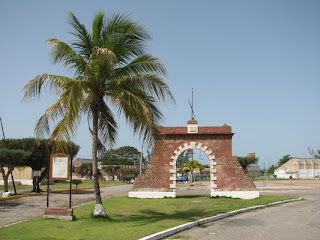 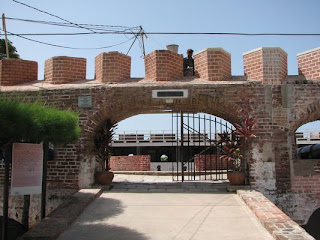 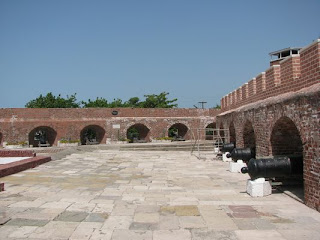 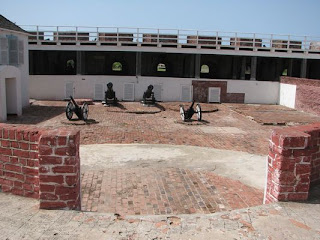 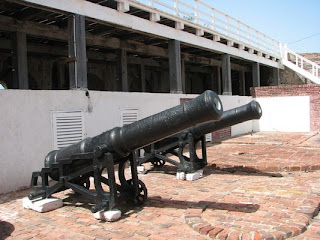 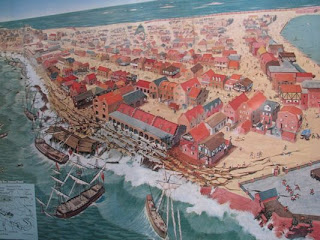 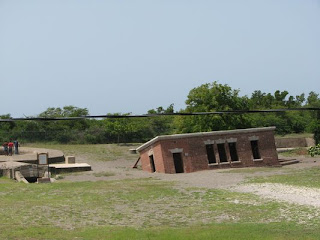 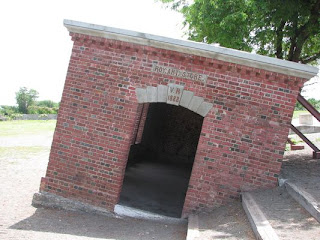 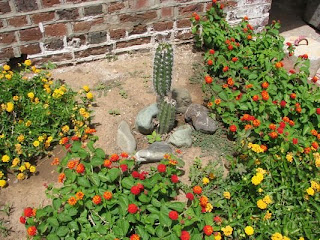 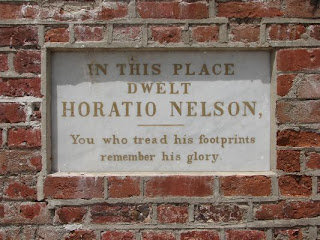 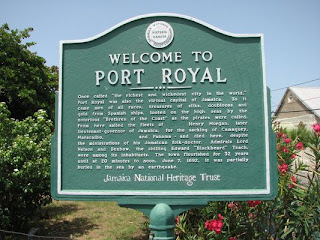 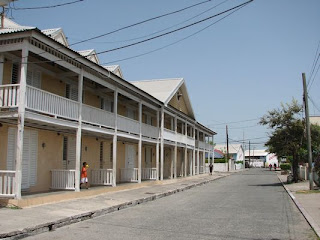 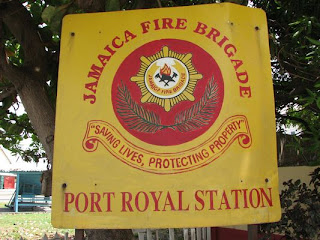 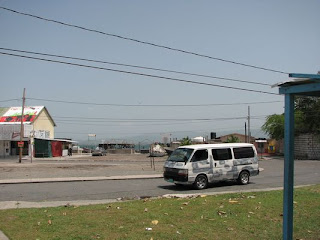 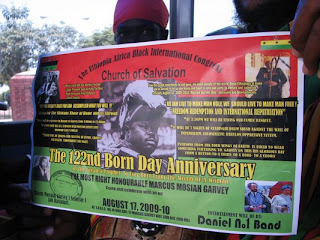 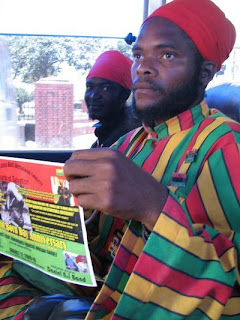 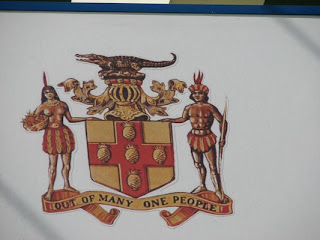