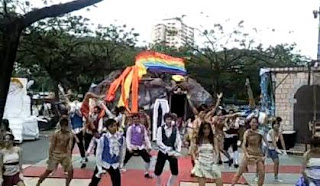 I stumbled onto a NUS student site with photos of last weekend's NUS Rag and Flag Day 2009. Surprise, surprise, it has a rainbow flag. It doesn't take one to find the Freshmen committee's site that has description of the theme for this major NUS student event, which I have copied below. Elsewhere in the world, the rainbow flag only means one thing. Ironically, at another faculty, we have someone who would have screamed very loudly at this...
From various student sites:
Exploding Colours
'Colours' symbolise the diversity of the NUS population. Just as the many colours one can think of, there are many students of different backgrounds – be it their ethnicity, nationality or even their upbringing. One can see the rainbow consists of a myriad of colours, much akin to the diversified NUS student population. We may be different in many ways, but we weather the hardship and challenges together as one NUS, to finally produce that rainbow for all to see – the display of the floats, a testimony of accomplishment.
To explode is to burst forth and hence 'Exploding Colours' conveys the message of uncontrolled enthusiasm and vibrancy brought forth by the diversity of the NUS community that we will witness at the 51st Rag & Flag!
Singapore