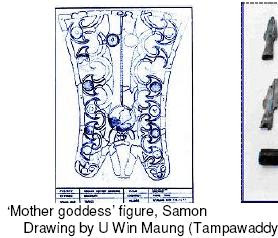 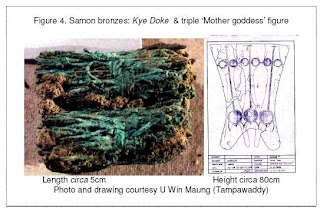 Most of us are familiar with the Silk Road and to a lesser extent, the Maritime Silk Road.  The Southern Silk Road, however, tends to draw a blank.  On Wed, I attended a fascinating talk at the Asian Civilisation Museum by Dr Elizabeth Moore from SOAS, London, on "New Archaeological Evidence from the Southern Silk Road: Debating the Origins of Bronze Production in Myanmar"
The Southern Silk Road refers to the precursor of the now oft-promoted Tea-Horse Route (茶马古道) which brings Yunnan tea across mountains and valleys from Yunnan across Tibet and Myanmar to Eastern India.  Dr Moore had done extensive archaeological work in Myanmar, in particular, those in the Samon and Chindwan Valleys of northern and central Myanmar not too far from Naypidaw, the new capital.  Many bronze objects were found in this region which dated to as far back as 600 B.C., which looked similar to those found in sites belonging to the mysterious Dian (滇) kingdom of Yunnan.  These may indicate the existence of a Southern Silk Road which existed even before the Tea-Horse Road.  In fact, there are some theories that propose that such a route would extend across the Tibetan Plateau to link up with the historic Great Silk Road.
Among the fascinating bronze artifacts found were men or deities sitting in foetal position (- I was tempted to suggest that these are in positions similar to the mummies found among the tribes in Wamena Valley, West Papua, Indonesia and of the Ifugao people in Luzon, Philippines), small reddish, cute and almost-cartoonish tiger carvings and enigmatic mother goddesses.
I look forward to more exciting talks at the ACM in the future.
Details from the ACM:
Archaeological exploration in the past decade has revealed a new Bronze-iron Age culture in central Myanmar. As most finds are located along the Samon River valley, they have become known as the Samon culture. Principally mortuary goods, many of the artifacts are unique and not found outside Myanmar. Other objects, however, parallel bronzes of the elaborate Shizhaishan Dian cultures of Yunnan. These include Heger I cowrie-drum containers and decorated mouth organs. Potential links are also seen in recent Shizhaishan excavation of headless burials and Samon headless bronze 'mother-goddess' figures used to decorate coffins as well as disarticulated inhumations found in both Samon and Dian cultures. There are few radiocarbon results for the Samon culture (circa 600 BCE-400 CE) but most predate the early centuries CE. This lecture will examine the origins of bronze production in the Myanmar-Yunnan cultural sphere.
About the speaker
Elizabeth Moore obtained her PhD in Archaeology from the Institute of Archaeology, University College London. She is currently a Reader in the Department of Art & Archaeology at the School of Oriental and African Studies (SOAS), London. Her doctoral and subsequent research included classification of proto-historic sites in Northeast Thailand from aerial photographs, and detection of prehistoric sites in the region of Angkor using radar imagery of NASA's Jet Propulsion Laboratory. In more recent years, her research has focused on landscape change in Myanmar where her father was born.
Asia - External Articles China