Epic Poem of Malaya: The painting 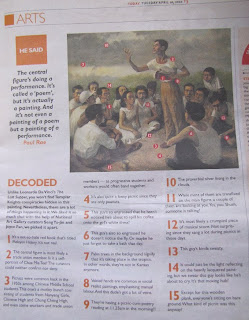 I love political paintings. The Epic Poem of Malaya is a magnificent piece completed in 1955 by Chua Mia Tee. It depicts 14 figures comprising students and workers listening to a young man reciting a poem - presumably a leftist version - of the history of Malaya. The entire atmosphere is not only reminiscent of typical leftist artistic style of the Cold War era, but also politically highly charged, which is not surprising given the chaotic political struggle during the period. I look forward to seeing this painting at the Singapore Art Museum, and eventually at the new National Art Gallery when the latter is open.
Today has an interesting writeup on the various details of this fascinating painting. Click the image - enlarge it - to see the full details.
Culture and Events Singapore