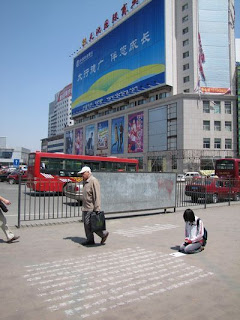 One frequently finds petitioners in Chinese cities seeking help over poverty or injustices caused by officialdom. In Changchun, I came across this girl in front of my hotel who wrote in chalk on the ground about the early death of her dad, a sick mother & brother in trouble of some kind. I dropped a few yuan for her. Over the next day or so in other parts of Changchun, I came across girls who dressed like this one and wrote similar stories.  So is this a begging franchise of sorts? Same dress and story!
China China - Northeast-Dongbei