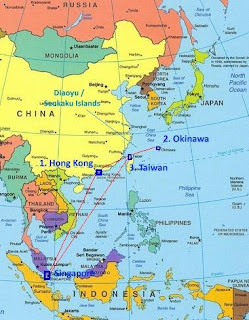 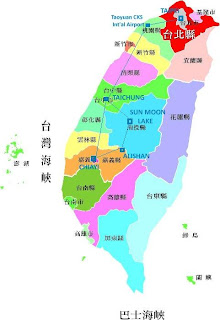 On Saturday, ET and I would depart for Hong Kong. After 2 nights in HK, we would fly to Naha (那覇), Okinawa (沖縄島) via Taipei.  Okinawa is the southernmost and newest of the Japanese prefectures.  We will learn to appreciate Okinawan/Ryukyu culture and cuisine, as well as visit sites relating to the Ancient Kingdom of Ryukyu (琉球國) and the WWII Battle of Okinawa.  The Kingdom of Ryukyu was once a Chinese tributary state but invaded by Japanese Satsuma warlords in 1609 and officially abolished and annexed by Japan in 1872.
On 25th Dec, we will fly to Taiwan and join A-Long and Shaun in Chiayi City (嘉義). We will drive around the central mountainous region of Taiwan, including Alishan (阿里山), Sun Moon Lake (日月潭) and Taichung (台中), before making our way to Taipei on 29 Dec in time for the new year celebrations.
East China Sea 2010 Hong Kong Japan Taiwan