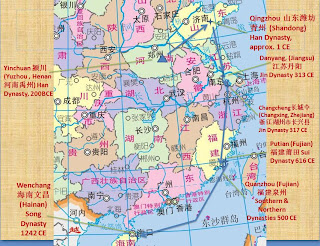 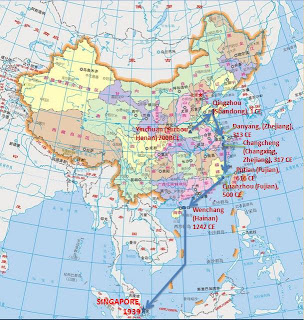 I have done some quick research into the location of my family in the past 2000 years, through the Tan family genealogical records (published by the Hainan Tan Clan Association) and have drawn this rough map.
From its origins in Yinchuan 颍川 of Henan Province (early days of the Western Han Dynasty around 200 BCE), my ancestors moved to Shandong when a patriarch was appointed military governor of Qingzhou during the Han Dynasty; then south across the Yangtze to what is today Jiangsu Province in 313 CE during the Jin Dynasty when the north of China was invaded by the five great nomadic tribes (五胡乱中原).  Then the family followed the imperial family across Taihu Lake to what is today Zhejiang Province where they stayed for approximately 200 years.
In 500 CE during the Sui Dynasty when the Chinese forces invaded and crushed Min Yue 闽越 tribal rebellions in what is today Fujian Province, an ancestor was posted to be the military commander of Quanzhou 泉州.  One of his descendants settled in Putian 莆田 where the family stayed till the 13th century. Over the next 700 years, various members of the family appeared in the chronicles for their official postings not only in various parts of coastal Fujian but also the highest echelons of the imperial civil service as ministers and in one case, prime minister.
In 1242 during the closing years of the Sony Dynasty, an ancestor was appointed magistrate of Wenchang 文昌, then the largest Han Chinese settlement in Hainan Island.  That was a traumatic era during which the Song Dynasty was eventually conquered by the Mongol Yuan's.  My ancestor initially led the resistance effort after he became the military governor of Hainan, but eventually allowed the Mongols to take over peacefully when he realised that the Song Empire was over for good.  Hainan enjoyed a peaceful and autonomous transition to Mongol rule.  The family lived in Hainan until the Sino-Japanese War that resulted in members fleeing to Singapore, around 1939.
Myself