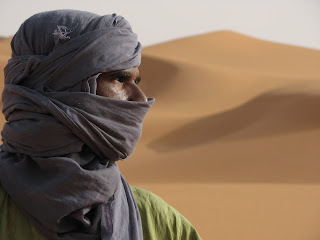 One of my all time favourite travel photos. This is Baraka, the Tuareg cook on my Libyan Sahara expedition 2008. I wonder how he is now. The Tuaregs, masters of the Sahara sands, are staunch supporters of Gaddafi. Many originally came from Niger or Mali, and were given Libyan passports by Gaddafi. With Gaddafi's defeat, many Tuaregs were forced to flee Libya where they have lived for many years.
Libya