The Marymount Series: Nimba of the Bagas of West Africa 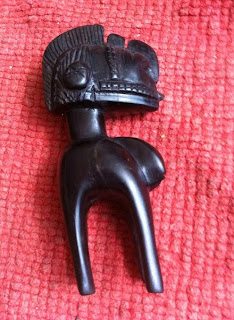 Carving of the Nimba headdress, Baga people of Guinea and Guinea-Bissau of West Africa. The headdress has four legs, a pair of unusually large breasts, u-shaped ears and is carried on the shoulders of dancers under spiritual possession. The Nimba is the symbol of fertility and is often performed during harvest festivals, births and marriages as well.
I bought this carving at the airport of Conakry, capital of Guinea, while waiting for a flight to the Cape Verde Islands via Dakar, Senegal. Shortly before I bought this carving, a corrupt Guinea police officer accosted me in the boarding lounge, checking my passport and asking meaningless questions in an attempt to shake me down for bribes. Gordon, my Australian friend, came at the right time, interrupted and distracted him. We then walked boldly to another hall. When I was confident the corrupt officer was not following us, I bought this carving at a souvenir shop with my remaining Guinean francs.  This wouldn't have been possible if I was forced to empty my wallet to pay that annoying robber-police.