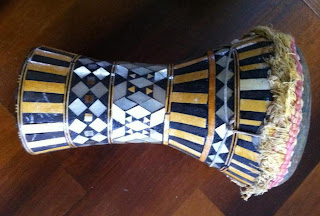 The Marymount Series: A drum from the Nubian people of Southern Egypt and Northern Sudan, acquired in 1995 near Abu Simbel in Southern Egypt. The Nubians were an ancient African race who once conquered Egypt and ruled as pharaohs with their own dynasties. They later converted to Christianity and eventually Islam after a period of resistance. Arabic has since become the main language of the Nubians, with the Nubian language coming under the threat of extinction.  Anwar Sadat, late third President of Egypt ( Egyptian Nubian father, Sudanese Nubian mother) and Gaafar Nimeiry, a late president of Sudan, were all famous Nubians.
Marymount Series