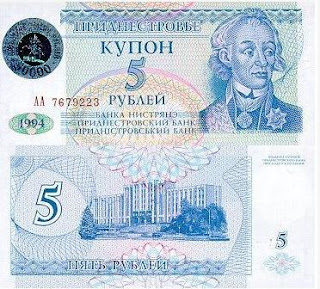 Transdniestria, officially known as the Dnestr Moldavian Republic, is an unrecognized breakaway state which declared independence from the former Soviet republic of Moldova in 1990. The local ethnic Russians and Ukrainians were apprehensive about an independent Moldova which may reunite with its ethnic brothers in Romania. With the support of the Russian 14th Army, they defeated the Moldovan government forces and occupied a narrow strip of territory in the eastern part of Moldova. Today, Transdniestria, with a population of 500,000 in a territory about 4000 sq km (6 times the size of Singapore), continues to exist in a state of uneasy ceasefire.

I got these Transdniestrian rouble banknotes during my 1999 visit across the ceasefire line. Inflation had rendered it more worthless than toilet paper - at least toilet paper has some utility value. PMRR 1 million was worth US$1 three months before my visit, but its conversion rate dropped to PMRR 3.3 million to a dollar when I arrived. One side of the banknote depicted Russian General Suvorov who conquered the land for the Russian Empire. The other depicted the presidential palace with a huge statue of Lenin outside. In fact, I was arrested briefly at the palace for taking a photo of the building. The black-coat security staff there, who were dressed exactly like those Italian mafia men one sees in the movies, kindly let me off after getting me to sign an offence record book and a statement that I would not break the same rule again.
Marymount Series