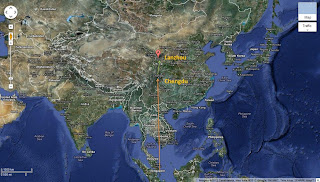 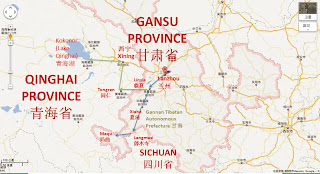 On 5th April 2012, I will begin a two-week journey to the remote southern part of the Chinese province of Gansu (甘肃省), and if time allows, the eastern part of neighbouring Qinghai Province (青海省).
I will begin my journey by flying to Chengdu, capital of Sichuan Province, where I will spend 1 1/2 day visiting a few archaeological sites that I did not cover during my 1995 work visit.  It would be most refreshing to see how this important Southwestern metropolis has transformed in the almost 2 decades since my visit.
From Chengdu, I will fly to Lanzhou (兰州), capital of Gansu, from where I will make my way to Xiahe (夏河) County in the Gannan Tibetan Autonomous Prefecture 甘南藏族自治州, at the fringe of the Tibetan Highlands. I will also visit the famous Labrang Monastery, one of the six greatest monasteries of the Gelugpa School of Tibetan Buddhism. From Xiahe, I will move on to Langmusi (郎木寺), a small one-street town that has emerged in the past decade as a backpacker magnet, renowned for its beautiful rustic Alpine scenery and idyllic Tibetan nomadic lifestyle. I will do a quick tour of the winding streams of the Yellow River at the Maqu (玛曲) plains, the photos of which often appear on tourist brochures. Then I will head north to Linxia Hui Autonomous Prefecture 临夏回族自治州, inhabited by not only the Muslim Hui Chinese, but also other Muslim ethnic groups of obscure Central Asian/Silk Road origins such as Dongxiang, Baoan and Salar. If there is time, I will head for Xining (西宁), capital of Qinghai Province, where I would do day trips to the Qinghai Lake 青海湖 (Kokonor) and Taer 塔尔寺(Kumbum Monastery), another of the great Gelugpa monasteries.  I will end my journey in Lanzhou before I return to Singapore.
China