DAY 1
Arrival in Penang 21.15, check-in at our lodging, then off to Gurney Drive Hawker Centre – reaching there around 22.30pm.  Some stalls were already closed, but we managed to try char kway teow, asam laksa (or Penang laksa as it is known in Singapore), Penang rojak.  All were good, but personally I thought the char kway teow done by a Malay stall in the Muslim food section was excellent.  The flat rice noodles were well soaked with eggs and the full flavor that came with that was heavenly.  The laksa (from two stalls in the Chinese section) were good and rich with fish broth, though not exceptional.

DAY 2
We wanted to begin the day by going to One Corner Café to try its famous Hokkien mee (or Penang Prawn Noodle, as it is known in Singapore).  We ended up in a wrong eatery near it – the one at the junction of Jalan Hutton and Bawasah Road.  Its Hokkien mee stall was closed and so we had the rather ordinary wanton noodle and fairly tasty chee cheong fun (rice noodle row with dried shrimp and thick sweet sauce).  We also had a local version of kaya toast there. 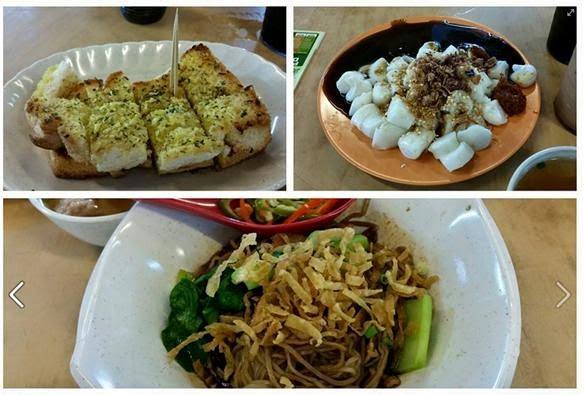 We walked down the street and found the real One Corner Café instead (2 Bawasah Road).  At this food court, we had the famous Super Hokkien Mee – very delicious soup! – and the Hock Seng Lor Mee (nice thick starchy dark gravy similar to the KL-style Hokkien mee plus ngo hiam slices). 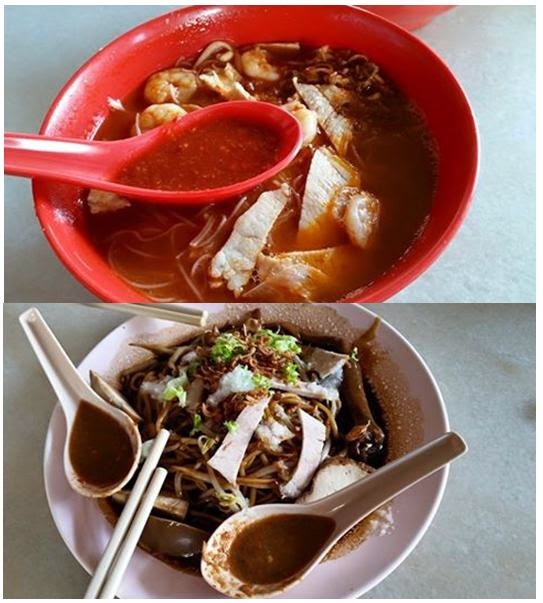 After that, we drove to the suburb of Ayer Itam in a valley nestled against the hills.  We visited Kek Lok Si Temple before rushing to the Sisters Curry Mee stall (Exit Jalan Paya Terubong, 11500 Ayer Itam).  This legendary stall is manned by a few elderly sisters in their 80s selling under a canvas cover beneath a tree.  Penang’s curry mee is similar to Singapore’s laksa but it contains less coconut milk. In fact, this version is somewhat too salty for me, but that could be just my personal preference. Nearby at the Ayer Itam market is a famous Penang laksa stall (Pasar Ayer Item Laksa, Jalan Pasar, 11500 Ayer Itam) but we did not stop as we were full.  There were many people at the stall, so it is probably good. 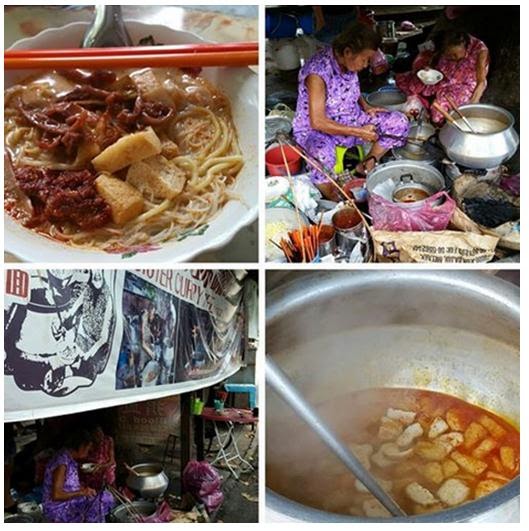 Back to George Town: In the late afternoon, we went to ChinaHouse, a renovated group of shophouses turned into a tastefully furnished rectro-style food and bar complex, with live music at certain timing.  We had rather expensive fusion cuisine (lamb balls, bento set, burger, etc) that was nothing to shout about.  The cakes looked nice but we did not try.  Probably good to drop by for coffee and cakes on a future visit.  153, Lebuh Pantai, Georgetown, 10300 Georgetown (www.chinahouse.com.my)

At 10pm, we joined a long queue that had appeared outside the well-known nasi kandar shop,  Restoran Liyaqatali Nasi Kandaq Beratur.  Nasi kandar is a north Indian Muslim collection of curry dishes eaten with fragrant rice.  Liyaqatali Beratur is possibly the most famous nasi kandar restaurant in Penang and it only opens at 10pm.  Be prepared to wait 20-30 min for it.  Located just outside a magnificent mosque lit up at night (98 Jalan Masjid Kapitan Keling). Just point what dishes you like. The curry fish and curry beef were particularly good. Best eaten with a group of friends, as you can order more dishes. 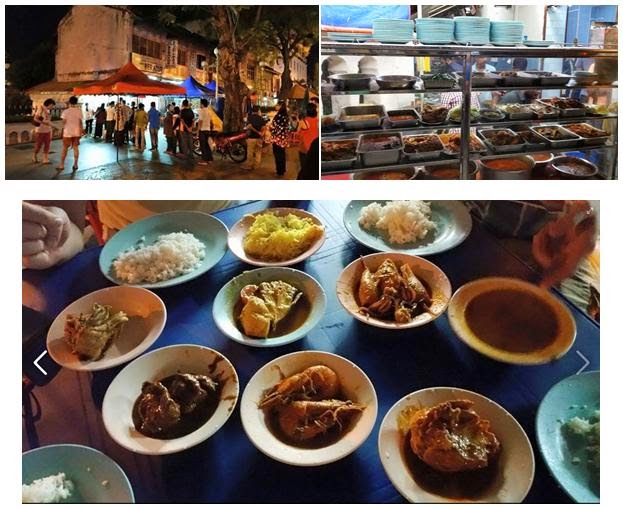 DAY 3
We drove to a dim sum restaurant at the junction of Jalan Pintal Kali and Kimberley Street.  We had to navigate its chaotic system of ordering before we ate. Reasonably priced but we thought the food was rather average.  Leong Kee Tim Sum Restaurant 龙记港式点心61 Kimberley Street. 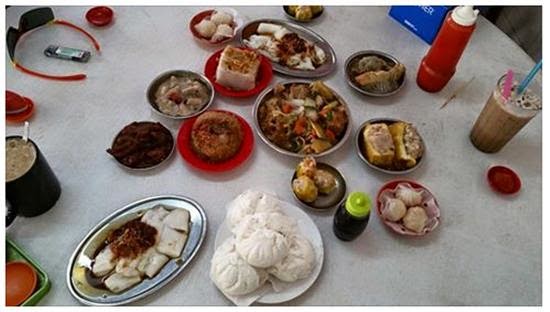 We headed out of George Town towards the southwest direction, stopping by at Ah Leng Char Koay Teow, Jalan Dato Keramat, Kampung Makam, which some say is the best char koay teow in Penang.  We asked for the “special” version with duck yolk added, for a total princely sum of RM13.50 (ordinary version 7.50).  Despite the price, it was definitely worth it.  The proprietress took her own time (30 min wait!) and broad hard strokes ( - you hear the loud wok noise even before you see the stall) to fry the dish.  This was indeed the best char koay teow we had in Penang, complete with 5 prawns and slices of clayfish. Not overly greasy, but very flavourful; And the rice noodle texture was smooth and delightful.  Highly recommended despite the inconvenient location out of town centre. 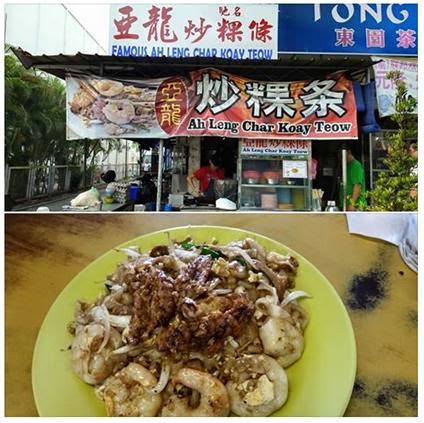 We drove across Penang’s central hills to the two-street town of Balik Pulau on the western side of Penang Island.  We stopped by a fruit stall to have fresh water melons (- you can have durians if you want too). Went past the market but did not stop by. The town is famous for its local version of Penang laksa – the most famous is Nan Guang, 67 Jalan Balik Pulau (at the T-junction of Jalan Tun Sardon and Jalan Balik Pulau) which has thick fish broth covered with delightful mint leaves.  Some food blogs rate this as one of Penang’s best. 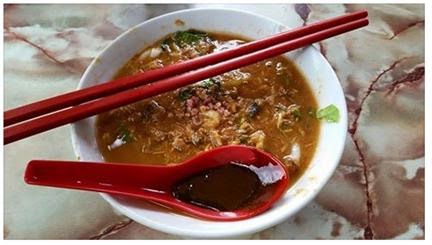 We drove southwards to the fishing village of Pulau Betong where you could have seafood by the sea inlet where fishing boats berth and Penangites bargain for the fresh fish harvested locally. Nearby is another famous laksa stall, Laksa Janggus, 338 MK, Jalan Bharu, Kampung Perlis, 11000.  I did not try this Malay-operated laksa stall but would try if I revisit this area again in the future.

Back to George Town, we went to Toh Soon Cafe 多春茶室: 184 Campbell Street, Off Penang Road, George Town, 10100 Penang; Opening Hours: 8am-6pm (Closed on Sundays), a coffee shop along a narrow lane off Campbell Street.  It is famous for its Hainanese coffee and toast bread, plus the eccentric and temperamental behavior of its female owner, who shouted and screamed at her staff, and joked loudly with the patrons.  I’m not sure if that was a performance but it was certainly entertaining for most patrons. 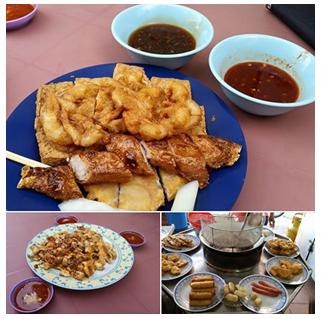 We finished the day with delicious Peranakan cuisine at Ivy’s Kitchen (58, Jalan Chow Thye, Georgetown. Phone:+60 13-433 7878), a small restaurant in an old conserved bungalow run by a husband-and-wife couple.  Be prepared to wait for 30 min for the food, but it was well worth the effort.  Delicious, carefully prepared dishes that bring much fame to this regional cuisine.  The prawns and fish were particularly tasty. 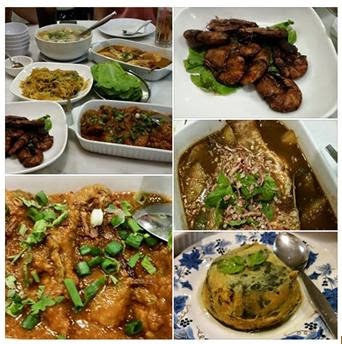 Peranakan dishes at Ivy’s Kitchen.
DAY 4
We began the day with bak kut teh (a spiced herbal pork ribs soup popular among Chinese in Malaysia and Singapore) at Coffee Island 皇排肉骨茶, 77, Persiaran Gurney, 10250 George Town.  The version here is not surprisingly the Klang version which is very herbal, as opposed to the Singapore version which is very peppery. I was introduced, for the first time, to dry bak kut teh, which is essentially pork ribs in dark sauce cooked in a clay pot. Very delicious! In fact, at this stretch of Gurney Drive, there are many bak kut teh restaurants that open early in the morning till midnight or later. 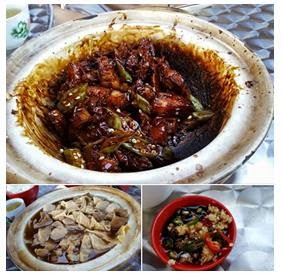 For lunch, we headed for Song River Café (松花江茶室) 65, Persiaran Gurney, 10250, George Town nearby. We did not have bak kut teh which is also this restaurant’s specialty. Instead, we ordered other dishes recommended by my Penang-based friend, Andrina.  Among our favourites here were the bitter gourd with runny egg, toufu with brinjal, oyster noodles and chili long beans. Vermicilli with steamed pomfret is also popular here though we did not have it.

After this wonderful final meal (for which I did not take any photos), we headed for the airport. Penang is definitely a foodie’s paradise and there are many more eateries to check out.