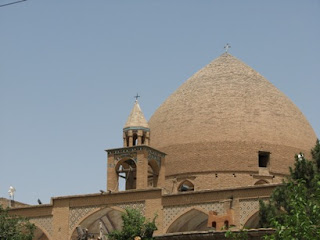 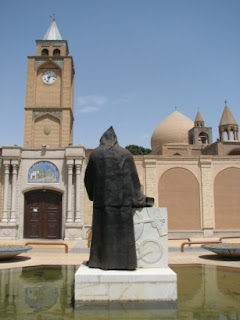 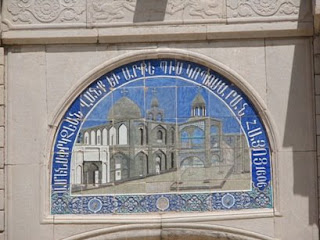 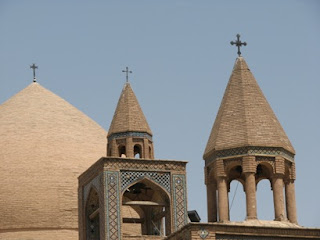 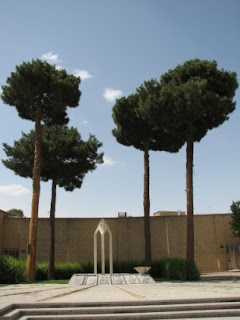 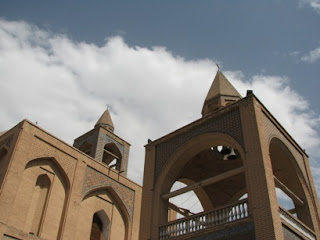 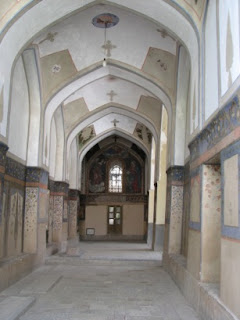 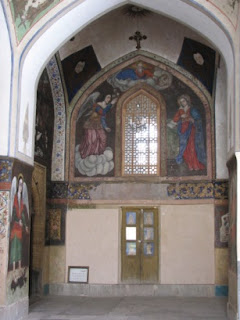 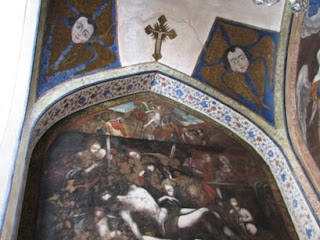 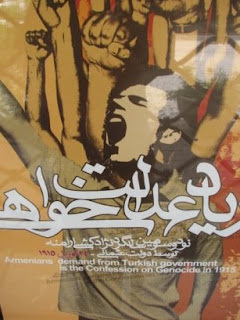 Jolfa – this is 's Armenian or Christian Quarter. Armenians have always been loyal subjects of the , from days of the Achaemenids' to the Islamic Republic. I have seen carvings of Armenian envoys bringing horses and amphoras with griffin-handles as gifts for the Persian kings at the famous 6th century B.C. Apadana Staircase at .
Armenian craftsmen and merchants have always been valued by various Persian dynasties. In the 17th century, Shah Abbas the Great transported a large community of Armenians from the city of (on the border of with 's ) to New Jolfa on the suburbs of his new capital at . They are hugely rewarded for their services to the royal court and their religious and trading freedom safeguarded by generations of shahs.
Today, Jolfa's Armenian inhabitants are distinguished citizens of the Islamic Republic and they have guaranteed representation in the Iranian parliament. Having such supportive Christian citizens also allows the Islamic Republic to boasts of its tolerance towards minority religions and ethnic groups, a privilege which is, however, denied to the Bahais, for instance.
is also a close unofficial ally of sorts of . I recall seeing Iranian products on sale in the markets of , capital of , and of how Armenians told me that , despite being an Islamic fundamentalist state, is a covert ally of in its struggle against Muslim Azerbaijan for the control over the disputed . Iran, with an ethnic Azeri population of over 20 million, is always wary of the possibility of independent Azerbaijan claiming Iran's West and East Azerbaijan provinces, which people in Baku, capital of independent Azerbaijan, called "Southern Azerbaijan". Your enemy's enemy is my friend – this is the eternal truth in geopolitics. Hence the close links between and .
Jolfa is today a very fashionable suburb with nice apartment blocks, travel agencies, ethnic restaurants and cafes, boutiques and a few old churches. The Vank Cathedral is an example of a marriage of Persian, Armenian and European architectural and artistic traditions. With its huge mud dome, the cathedral looks like a mosque from afar. Close-up, one sees the cross on top of the dome, plus bell towers typical of a church elsewhere in the world. The inner walls of the main cathedral building are lined with well-preserved frescoes and murals of biblical scenes, coupled with Persian mosaics and tiles of Islamic geometric patterns typical of mosques in .
The cathedral museum, apart from displays of Christian art and everyday church objects, also proudly displays the various decrees and edicts issued by Persian shahs granting rights and privileges to the Armenians, or grants of protection of persons and properties. There is also a gaudy exhibit on the Armenian genocide and of how 1.5 million Armenians were massacred by the Turks in the early 20th century.
Iran Middle East Odyssey2